The History and Philosophy of the Nordic Folk School Movement

The folk school movement has a rich and fascinating history dating back to the early decades of the 19th century.  The social and political revolutions that paralleled the Industrial Revolution created a demand for more education. At a time when formal education was restricted to the upper classes and university teaching was in Latin, the folk school movement presented a new challenge through its democratic philosophy.
Conceived in Denmark by the great 19th century Danish nationalist poet, philosopher and theologian Nikolaj Frederik Severin Grundtvig, the movement continues to grow, as it searches for new ways to respond to the changing needs of people in a changing world. Today more than 400 schools across the Nordic countries, and over 150 schools in Northern and Eastern Europe, respond to Grundtvig’s belief that all people should have access to education according to their own needs and interests.
During the 19th century, massive technological and economic changes forced the Nordic populations into a painful process of adaptation from their old ways of life. New nation states, new constitutions, a new nationalism and a new social class, the bourgeoisie, were born. At the same time the identities of the Nordic countries were imperiled: Denmark was threatened by Germany; Finland was then politically a part of Czarist Russia; Iceland was a Danish colony; and Norway had been forced into a political union with Sweden. A new consciousness about individual national identity began to grow in each Nordic country. The birth and spread of the folk school system is closely tied to these political and social conditions, and played a major role in the establishment of the modern Nordic states.

The educational philosophy for the folk school grew out of N.F.S. Grundtvig’s extensive and influential work. In the 1830s, Grundtvig began a tireless campaign to convince the Danish population that a new type of school was necessary if the Danish people were to cope with the transition to democracy. Inspired by visits to English universities, Grundtvig stated that these new schools should encompass three toward breaking the bonds of Swedish cultural and Russian political control. In Finland and Norway, the schools were involved with national revival movements struggling to legitimize folk culture and break the grip of foreign cultural influence. In Norway the folk school movement rejected Danish cultural elitism and sought legal acceptance of Norwegian peasant dialects. In all four Nordic countries the folk schools became part of the cultural and political liberation and emancipation of disenfranchised groups, first the farmers and small landholders, and later the industrial workers.
As early as 1895, the Danish Parliament decided to offer state grants to the folk schools. This is an early example of a particular feature of Nordic political thinking which persists today and influences much social legislation: if an initiative taken by private groups for the benefit of the public interest is considered useful and worthwhile by the state, public authorities will support it, while preserving private responsibility and economic risk. Today, public grants account for the major proportion of the budget of the folk schools. Yet, the folk school movement has developed independently of the official educational establishment, and although they accept some degree of supervision by the Ministries of Education, the Parliaments have continued to insist through legislation that government supervision remain minimal.
The number of folk schools in the Nordic countries has remained high since the early 20th century. With the transformation of Scandinavia into a full industrial society, however, important changes in the schools have taken place. In the past, students had come mostly from rural populations, then
industrial workers enrolled, and during the depression of the 1930s, considerable numbers of  unemployed workers entered the schools. These later students brought with them an urban culture different from the traditional one associated with the rhythms of farming life. A more diverse student body brought complexity and change to the folk schools, and fundamental values and beliefs were challenged there as they were throughout the entire society. After World War II, the folk schools were as changed as the societies themselves. 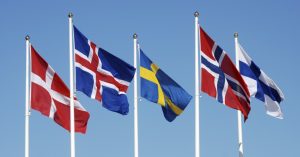 The Nordic countries are industrialized societies, among the wealthiest in the world. They are dependent upon international trade and access to world markets, and exist in a context where education has grown into basic principles:
His philosophical approach to education was based on his faith in the innate abilities of all people, and his belief that education should be available to everyone. Instead of following a rigid curriculum, the goal should be to inspire students through confidence and “empowerment.” These “schools for life,” as he called them, would not mold the masses into predefined shapes, but challenge and assist people “to grasp their own identity and look after their own affairs and interests.” Grundtvig stressed adamantly that the folk school should not include vocational and professional training. He also
believed that students should board at the school, like members of a family, and attached great importance to the interactions and discussions among teachers and students.
Grundtvig himself never founded a school. Yet a total of about 50 folk schools were founded in Denmark between 1850 and 1870 by his many disciples. The first was started by Christian Kold for the purpose of meeting the educational needs of young farmers, using non-formal educational methods. The emphasis was on personal development, good citizenship and democratic participation, in addition to practical knowledge of agriculture.

The idea of the folk school spread rapidly, and the movement is in fact credited with creating a true democratic rural civilization in Denmark. The earliest schools were established by socially-conscious university men of the cultural elite, often theologians. But the impetus soon shifted to grassroots  groups of local farmers, and later labor unions, and the movement was carried forward by the common people themselves. All schools were privately owned either by the head of the school or by a collective.
As the movement spread to other Nordic countries, it responded there to local and national interests, developing its own particular national flavor. For example, the Finnish movement, which was spurred by Swedish and Russian domination and the nation’s desire to strengthen the Finnish language and culture, took conscious steps a major business to serve the needs of a population and the constantly changing conditions of life.
Today, the folk schools have a complex relationship with social and educational establishments as they continue to define and redefine their role. Their purpose is no longer as easily identified as when they were instruments of oppressed but emerging groups within society. They continue to exert the
influence they have always had on educational philosophy, but they are not part of a machinery of formal academic credentializing for the adaptation and mobilization of labor, and still remain distinct from the social welfare establishment of the countries.
The folk schools as a whole form a network of residential, adult educational institutions, which offer one- and two- year programs of study. They do not grant degrees, which is consistent with the philosophical position that they seek to enlighten and educate, not train students for industry, technology, bureaucracy or academia. The folk schools are eager to be havens for contemplation and renewal and see their mission as one which inspires, not compels. They are independent, self-governing, and generally un-specialized, encouraging learning for life instead of for an exam. Each school remains free to set up its own curriculum, to admit and maintain students on its own terms, and to hire faculty and plan projects with little or no influence or oversight from the state, which remarkably still provides 75-80% of the funding.
Students today come from all over the country, as well as internationally. They vary tremendously in socioeconomic, educational and occupational background, and represent a cross-section of contemporary national culture, with all its needs, interests, and problems reflected there.
With their roots in small towns and rural areas, folk schools normally have a close relationship with the surrounding communities and act as centers for cultural activity. Students have contact with  local citizens, thus contributing to the experience-based philosophy of the schools while
offering local people the opportunity for information, debate and discussion. This framework has placed the folk schools among the most progressive and dynamic learning centers in Europe. They help shape the issues confronting a changing world and stimulate active participation in society, thus promoting a living democracy.
Despite the national differences in the folk schools, much of Grundtvig’s original idealism remains at the heart of this unique educational movement: the holistic view of the human being and society. As the world becomes smaller, different cultures encounter one another, global conflicts multiply, and the environment reaches a crisis, the need for this type of education may grow. Thus they remain schools for life.